Blessed with a Gold Angel Award! 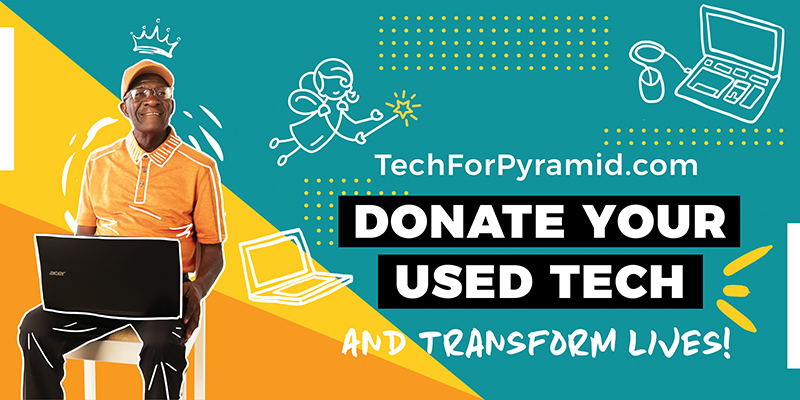 With the help of Bulldog Stragey Group and Kylene and Ryan Studios, Grova Creative wins a Gold Angel Award for their “Tech for Pyramid” Campaign! Learn more about the campaign below.

To be able to function in today’s society, people need to be able to do many tasks that are normally overlooked and that are generally assumed to already be known amongst individuals. A few examples of some of these necessary skills are basic computer proficiency, being able to fill out job applications, safe internet searching and usage, online budgeting/bill payment and financial management, or even basic communication with others via the internet. Without access to working technology, these skills are unable to be learned and functioning in society becomes difficult and unrealistic. This is where the D4 Pyramid Campaign comes in.

Pyramid is a school for individuals with intellectual and developmental disabilities. They have five different locations throughout the state of Florida: Pensacola, Fort Walton Beach, Panama City, Tallahassee, and Tampa. The purpose of this organization is to make their students strong and contributing members of each of their communities. In order to do so, Pyramid needs to have all of the tools and supplies needed to teach their students. The 4th District of the American Advertising Federation is doing everything that they can to make this dream a reality. Led by Grova Creative, they have organized a public service initiative called “Tech for Pyramid”, where they are collecting used technologies and funds to donate to these five different Pyramid locations.

Giavona Williams, the D4 Public Service Advocate and founder of Grova Creative, has made it her mission to help Pyramid transform the lives of their students by making sure that they have all of the tools they need to thrive and be the best versions of themselves. Working with Bulldog Strategy group and Kylene and Ryan Studios they strategized a positive, cheerful, and 100% organic campaign coupled with compelling design that was powered by donated media. Lamar Advertising in Tallahassee, Fort Walton, and Panama City donated billboards, and other local publications donated advertising space. Using those outlets as well as industry newsletters, contact lists, and social media, the word was out. Within only four months, they were able to collect over 50 pieces of donated tech. From cameras, laptops, desktops, ipads, cash, and more, the need was fulfilled above and beyond. Williams states, “We have been working hard trying to collect as many different technologies as we can to help Pyramid.”

This campaign was recently awarded a Gold  Angel Award for public service in Advertising in May of 2019. Vanessa Miranda, a Junior Designer at Grova Creative, adds, “Seeing their smiling faces when we drop off the different items we’ve collected makes it all worth it.”

To figure out how you can also transform your #TechTrashToTreasure, please visit the website: http://techforpyramid.com.

Conducted by the American Advertising Federation Fourth District, the Angel Award Competition honors the very best in public service advertising. It combines two missions of the organization: to utilize industry expertise to address community issues, and to celebrate and honor advertising excellence.